Adventures in Buying an electrical inverter

My life as a trucker requires  that I keep electronic devices.  Since I started using a “cpap”  an electrical device that stops sleep apnea, as well as other electronic goodies like my laptop, that require a plugin,  I have started keeping an electrical inverter in my truck.  Electrical inverters are very easy to find in any truck stop or drug store.  Two of the brand names “Cobra”  and “Power Drive” completely dominate the shelf of the Pilot truck stop I go to and I have used both of these brands.  Both of these brands have failed me miserably.   I have never gotten either to last more than about 10 days and usually far less  than that  before it breaks or stops working.  I have had the plug that goes into my cigarette lighter melt, I have had a cobra inverter (400 watt) that under the lightest load   start squeeling and the red warning light come on.  or the thing just gives off a weird electric smell and dies who knows why.  Sometimes I am able to find the receipt and return the thing for another one which dies again in a few days sometimes I just shell out another 40 bux or more and have the luxury of an inverter for another few days before It dies again.  Then one night  in post falls Idaho at the flying J truck stop a miracle occurred,  I had pulled in there to buy an inverter because mine had just (yep you guessed it) died.  I got a tired but friendly girl behind the counter there to open the display case of inverters so I could pick out my next lemon I looked at each one suspiciously,  I carefully inspected them and noticed one thing about them that I had not paid any attention to before.  They were all made in China.  I asked the girl if she had any not made in china?  She just stared at me as if I had asked her  for directions to a town in China.  So I began turning each and every one over and reading where it was manufactured every one was made in China.  Then I picked up one 150 watt little inverter and just glanced at the back It was smaller and if anything less rugged looking than the rest of the Inverters the only thing about this Inverter that set it apart was that it was manufactured in “Taiwan” not “China”  I sighed and handed it to her.  ”I'll take this one.”  Well that was four months ago and that little inverter is still working for me. I decided I'd better reward it and the company that manufactures the thing “Sima”and post a picture.

SIMA makes the best Electrical Inverter I have used. 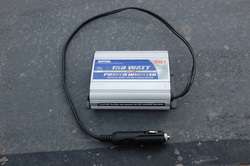 This little Inverter lasted me over a year of daily hard use.
I wrote this humerous  (I'd hoped) article several years ago about my experience buying electrical power inverters at truck stops.

There are many products which I use that are made in China that are excellent. And the quality only seems to keep improving.  I'm no longer driving over the road, so I'm out of touch now (2018) with whether or not there are still quality issues, with these particular electrical  inverters made in China (or anywhere else). It's like anything. You have to shop around to find the best products, irregardless of which country it comes from. Thanks